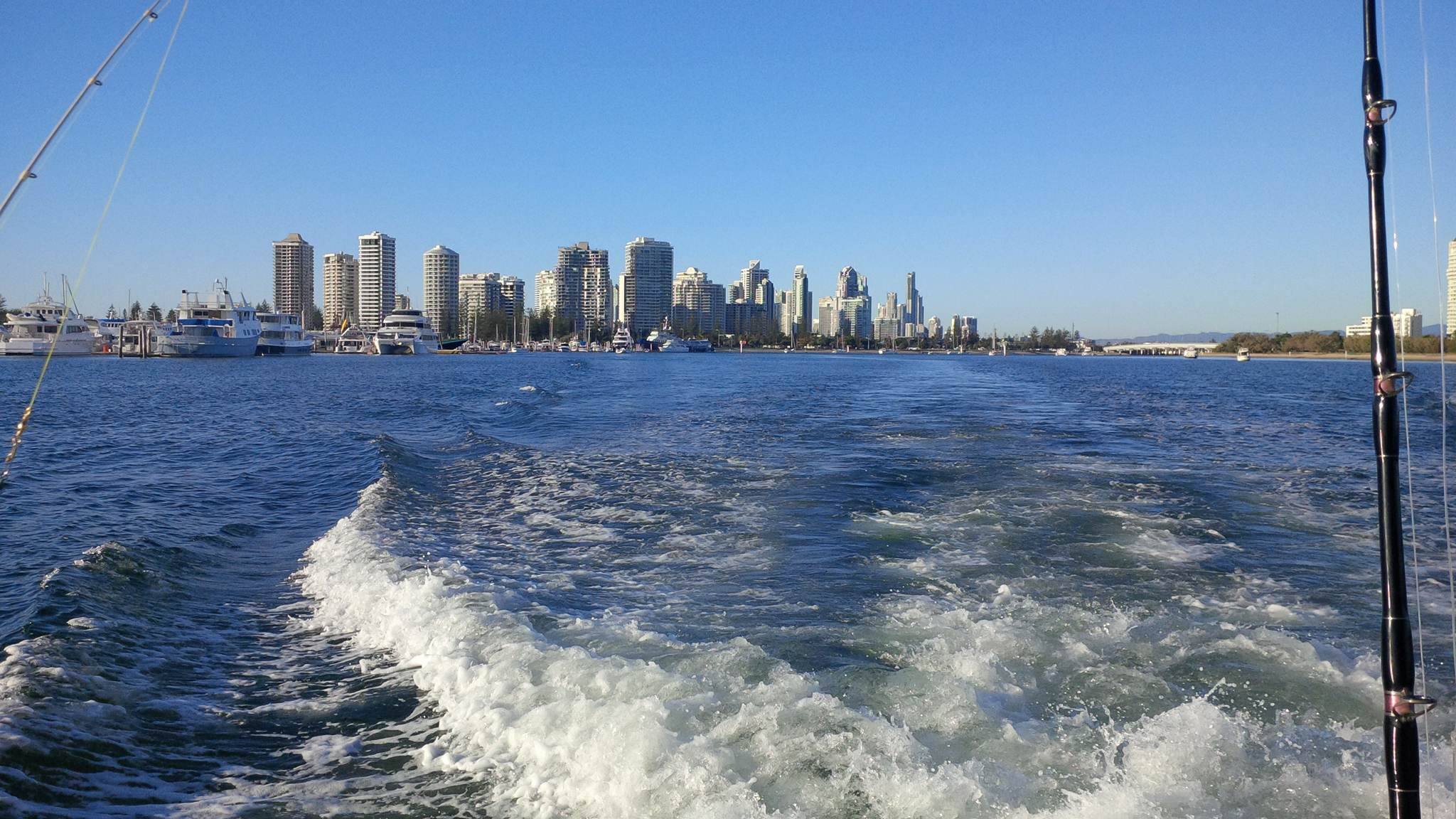 Having moved to QLD in Feb 2017 one of the first things I did was approach the Gold Coast Game Fishing club and put myself out there looking for a local boat to crew on with the prospect of catching my first Marlin.
Dave sent me a message as he fished now and then work permitting with another guy from the club, but the plan was to get out at least once a month out wide to try for the mighty marlin.
Of course I was keen as, jumping in the car that weekend I headed down the coast to meet with him and talk fishing… feeling relaxed I headed to the GCGFC for my first club meeting to meet my fellow fisho team mate Damian and talk more fishing and get a feel for the club and its members.
We all hit it off as a team, and my new Gold Coast Fishing Family started, and Team Witchn (Witchcraft) was created. So far, I have managed to suss out the GoldC seaway at dark!! It’s just like in Adelaide fishing with mum we haven’t been back until well after dark!! – the only thing I’m missing is a husband at home cooking me a lamb roast like Dad makes us… gee I had it lucky back in rads!! 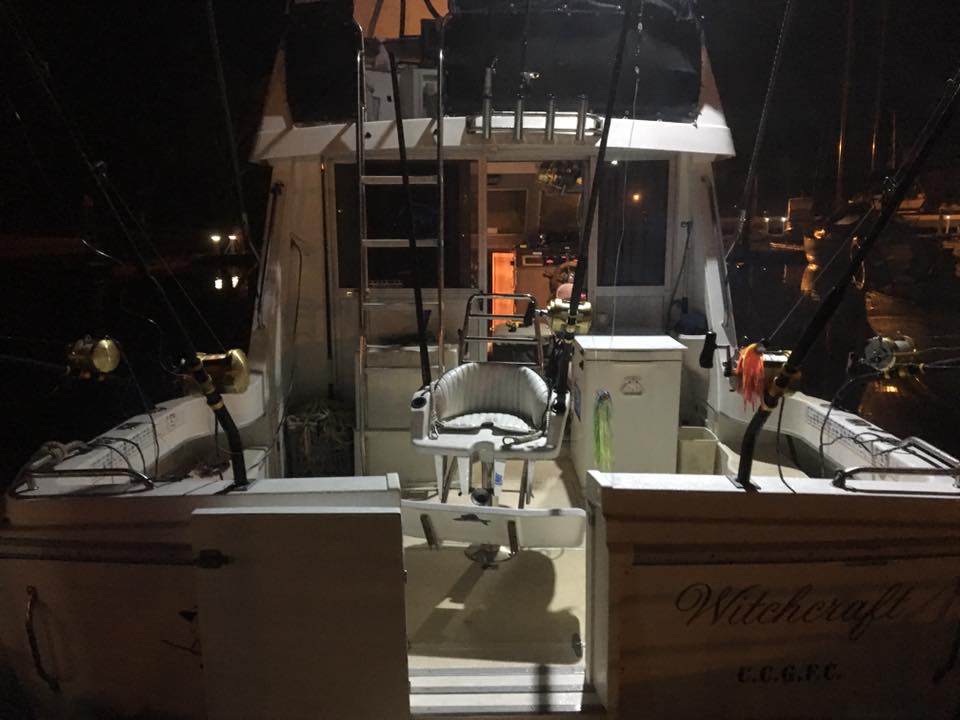 Sunday marked our 4th trip out together, the first trip out we managed 1-1-0 on Blue Marlin, our second trip was donuts, 3rd trip 1-1-0 on yellow fin tuna, and then there was this trip which will mark our epic fishing adventure and some valuable re-grouping afterwards and serious forward planning.
We met at the marina at 5.30am, the boys where already as i was running late… oops… rods where out and set up, so I jumped on board and off down the seaway we went watching the sun come up as we exited the break wall and headed out wide.
The morning saw us go directly to our first spot before we put rods out and trolled to the next spot. We had worked out our strike times so we were set. After an hour trolling it was my turn on strike… not knowing what to expect, I was waiting patiently for my fish… Go Ren go Ren.. I hear… I look out the back of the boat to see this iridescent blue stick poking up behind my lure… OMG OMG OMG… I strip off layers semi excited and a lot nervous about what is about to happen, zzzzzz the line peels off and stops, then zzzzzzzzzzz again and then stops…. and then it just stopped!!!! fish gone we worked the ground for a while but couldn’t entice it again… so off we headed towards out next destination.
We had looked at rip charts on our way out so wanted to suss out a couple of things we had been talking about, so we spent the next few hours trolling the usual grounds and current lines without much success.
As the day was getting on we trolled back into some closer grounds where skip had a theory, based on that we moved in and worked an area, skip and I were up in the fly bridge watching and analysing the sounder and sussing it all out. Damo was down stairs, when we hear a reel go off… zzzzzzzz what was that said skip!! as I looked down and saw Damo next to a reel… Damo being a jokester I replied hahahahaha…. but the look on his face told us it wasn’t him mucking around and before we knew it zzzzzzzzzzzzzzzzzzzzzzzzzzzzz 200m of line was gone!!
We all jumped into action to clear the deck, it was Skips strike time, so he jumped in the game chair, I climbed back up the fly bridge to drive the boat, and Damo finished clearing up the last of the deck and got everything else ready.
Once settled we regained some composure and then started working the fish, after its initial jump out of the water it decided to go deep and stayed down there for quite some time…
Slowly we turned into the current, and then started to slowly back up on this beast of the ocean. Approx 25 minutes later is was right near the boat, in our attempt to tag and release the fish, Damo grabbed the leader and pulled it towards the boat… as we both leant over to grab it and tag it… Blue freaked out… we freaked out ….. and off it went straight under the boat… and we know how that usually ends!!!
Dave screaming at me tag it Rennie, tag it Rennie as his arms are on fire and he’s hurting…. tag it, tag it… just like a scene out fishing with mum with us screaming at each other and Steve Morris calling me Rennie, hahahaha….
The mighty blue powered itself away from the boat, full circle and them came leaping at us… Damo ducking for dear life… Skip holding onto his rod for dear life… and me standing there in shock.. thinking that’s a big bloody fish!!!!
and just like that – GONE!!! line snapped before we could get the tag in and off it swam back into the deep blue..
Skip stoked that his last day of holidays landed him a Marlin as it had been a couple of years coming, Damo and I looking at each other cracking up laughing… OMG did you see that, nearly took your head off… its massive… how’s your ass… did you turn the camera on…. you name it, we probably said it.
But we certainly had fun!!
[wpvideo rBsIiyqM]
Lessons of the day:
1 – Need a longer tag pole (top shot)
2 – Need to shorten the lure rigs
3 – Need to practice erratic tagging in the park, so I don’t look like I’m about to throw a Javelin…
5 – Don’t worry about the camera Ren
6 – Rum farts are disgusting
7 – Damo aka Marlin dodger needs body armour before next trip
4 – Go to the gym
5 – These big boats are so different to our bar crusher that we can easily manoeuvre around, these things take time and working with 2 diesel engines as well under pressure situations isn’t easy, but I know that will come the more I’m out there and doing it.
Ren