Given the upcoming tuna season we decided we should get together and get out for another fish together chasing something bigger than squid… so we decided to take the girls down to meet some of our other second fishing family for the weekend and introduce them to some of the people from Pt MacDonnell! – Another place that is now close to our hearts, thanks to Chucky Tuna!
Rocking up at Causin Havoc, Gary and the southerly fishing charter boys were assuming the position, we were excited to meet Bec and Todd’s new mini edition Evelyn, such a cute little cabbage patch and so tiny.
After watching a couple of weeks of planning and side line training and strategies the new team were a well-oiled trained machine and now all we had to do was put it into practice. Sunday morning saw us up at 5am after a night of card games and a couple of quiet ones, we were up and ready to hit the water especially after the day’s before exciting catches.
Alarms set…. Up and ready, hitting the water at 6.30am we were off like a frog in a sock and super excited! Heading out a few miles we saw some birds and figured we should set our spread, running 5 lines we were ready for whatever was coming, we had planned and practiced…
The ocean was alive with birds and dolphins, our first experience of flocks of big gannets mixed in with turns and divers all going head first into the water… we thought to ourselves WOW, surely we must hook up going through this…
Following the bird trail we went … waiting for a hook up, waiting patiently we saw a whale leap out of the water just behind us followed by a dolphin grabbing one of the birds by its tail as we sat there in awe watching what was going on and then we heard the sound we had been waiting to hear… zzzzzzzzzzzoooooo the line was peeling of… all of us just looked at each other and cheered.
Gone….. False alarm …. Devastated we re-set and off we went again following the same trail of birds around, looking for a glimpse of sunlight to hit the water, the heavens opened and zzzzzzzzzzzzzzzzzzzzzooooooo we were on again!!! This time well and truly hooked.
Cyclone was on strike, strapped in and ready to go, not knowing what was on the end of the line or the size we were extra careful being our first experience of a potential “ barrel” … an hour later we saw colour, colour, colour we all screamed in excitement.. Gone… back down into the depths.
As time passed we all sat there in anticipation for some colour again.. boom colour, putting all our thoughts and sceanrio’s into practice, we were ready!! Bring it on.. Nothing we planned or prepared for happened… but what we did do and are so proud of, we were a team and not just any team, a well-oiled machine… “team justagirl”.
And this was our prize catch… wasn’t in the 100kg class but it prepared us for tomorrow and what may lie before us!! 65kg and a great fish by anyone’s standard!!
Well done girls – not only do we gel outside of the boat, but inside the boat when it matters…
Tonight saw us celebrating with some of the locals on our first catch after a couple of years of trying, thanks to the team and everyone at Pt Mac for making us feel welcome.. PS Jager bombs aren’t our friend but they make us do the moon walk 🙂 and we have established we have a naughty team and a good team… (im sure you will work out who is where over the next 12 months … hehe) …. Ren
*video of it will be available soon once edited* 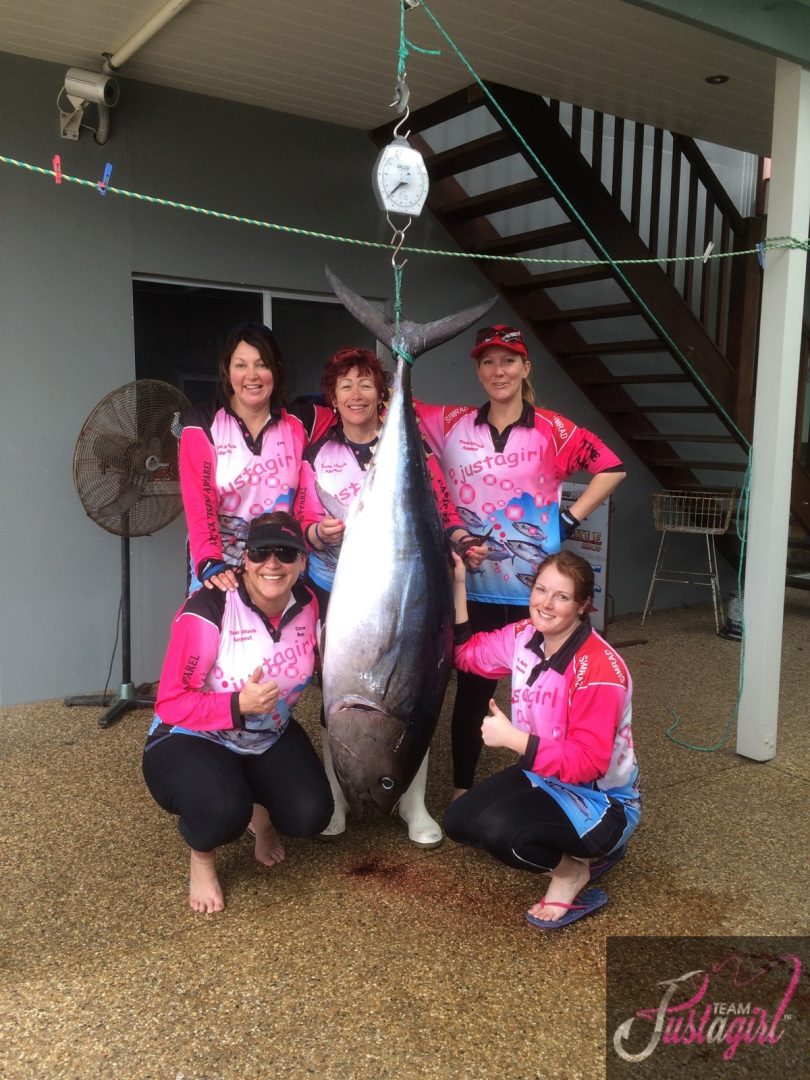 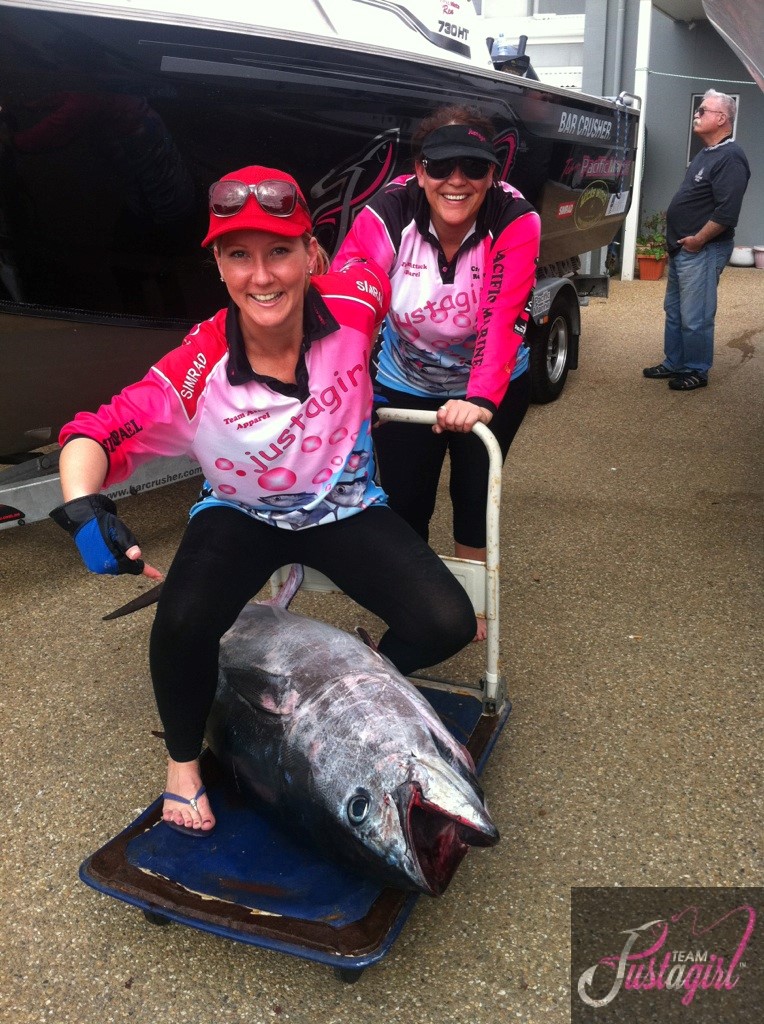 One Team <3 One Dream