The Peter Teakle Port Lincoln Blue water classic – March 14th-20th 2015
The Peter Teakle Port Lincoln Blue water classic has been fished and is over for another year. What a great comp this is.   5 days of fishing Port Lincolns finest areas, a fairly untouched fishery and camping at the beautiful memory cove, throw in 40 odd keen anglers 15 boats and it all equals fun on and off the water. Our main competition this year came from Team Micks Winch and what a battle it turned out to be.
Day one – justagirl as the winner of the under 25 ft. category last year got to lead the Sail past. This was quite an honour in our eyes leading all the boats out past the Club president and his crew. Then it was game on; the race was on out of the harbour and off to Memory Cove. We had a few problems getting set up and figured that as we hadn’t had breakfast we would stop in the shallows and the protection of the bay have a hot cuppa and food, line in wasn’t until 12 so we had plenty of time. We knew Mick and crew were going straight out to the cabbage patch they were going to try and get a head start on us, which they did. We wandered on down and stopped at Taylors and filled up on livies. we didn’t score any points that day, Micks crew came back with a massive smiles and wouldn’t tell us a thing, Team meeting decided we couldn’t let them get to far ahead so we would head out to South Neptune’s the next day  and spend the whole day out there.

Monday wasn’t to bad weather wise it was cold and windy but seas weren’t too bad, Kev doesn’t fish very much so he was keen and we were keen to give him a shot as well, we trolled all day, Kev got 1 losing about 8  which was very frustrating. We only had reels of 6 kg and 4 kg on board so it took a while for him to get the feel for it. Renee drove all day and I couldn’t land a fish to save myself. I managed two and lost 3 or 4,  that was not really the start we were after. At the end of day 2 at least we had some points on the board. Mick’s crew again came in smiling and not talking – secret squirrel business, we were in a panic.

Tuesday was a terrible day, the boys were heading out deep again and we decided not to as it was blowing about 30 knots. we snuck around the back of Thistle Island hoping for a ray , we hooked 2 but didn’t get them in the boat, so we got back into the camp with no extra points, once again Teams Micks winch was all smiles and filling out record sheets and talking about all the rays they had hooked, without letting on what they had actually caught and what line class. The points had gone up on the board and they had 5,512.70 and justagirl had 837.50. It was time to take some serious action or give up.

Wednesday as skipper I made the call, get up early and head to the cabbage patch for the day, we knew everyone else was going to Neptune’s, we also knew there wasn’t a huge amount fish there. The trip out to the cabbage patch was a long one, we had a good 3 meters and chop as well. we persevered and got out there with Majesnik and Spartacus, fishing with the big boats does give you a sense of security. The patch on its own is rough and Wednesday wasn’t any different. The fish were on from the first instance, Kev was on fire and after he had about 8 fish it was decided he would take first strike and Ren second hook up. I spent the day at the helm being the most experience as skipper and knowing how to drive with minimum pain to my crew. We hooked 22 Tuna and knew we could now be in with a chance. We fished right up until lines in at 5pm. We got back into camp and it took ages to fill in all the sheets, Spartacus had 43 Tuna tagged for the day and both big boats were asking how we went as they said every time we looked at you you were hooked up. We lost about 20 as well but knew we had to continue with light line. Team Micks winch were not giving anything away. so we planned to get out and try to  get about 1000 points the next day  before heading into Port Lincoln. We now know that Team Micks Winch had a total score of 7572.95 at the end of day 4 we had 7158. So we were behind still.

Thursday
The last day saw the winds up again, we planned on going to Williams Island with Galaxy Star, they were after Sharks and Rays, we knew if we could get 2-3 rays we would get the points we were after. We could see birds working in the distance so decided to have a look, Yep Tuna, we tagged 3 for just under 1000 points then took shelter in Williams to catch a ray, we didn’t have much luck and after a couple of hours got bored. It was decided to chase the Tuna again. Kev got what we thought was the cutest Tuna ever, measured a whole 55 cm and didn’t go line class only to find out later it was actually an Albacore the first for Kev and the first for the boat. We finished with 9 for the day and fished until lines in at 4. Hopefully we had done enough. We arrived back at 6.30 to retrieve and get out record sheets in, had we done enough? We hoped. 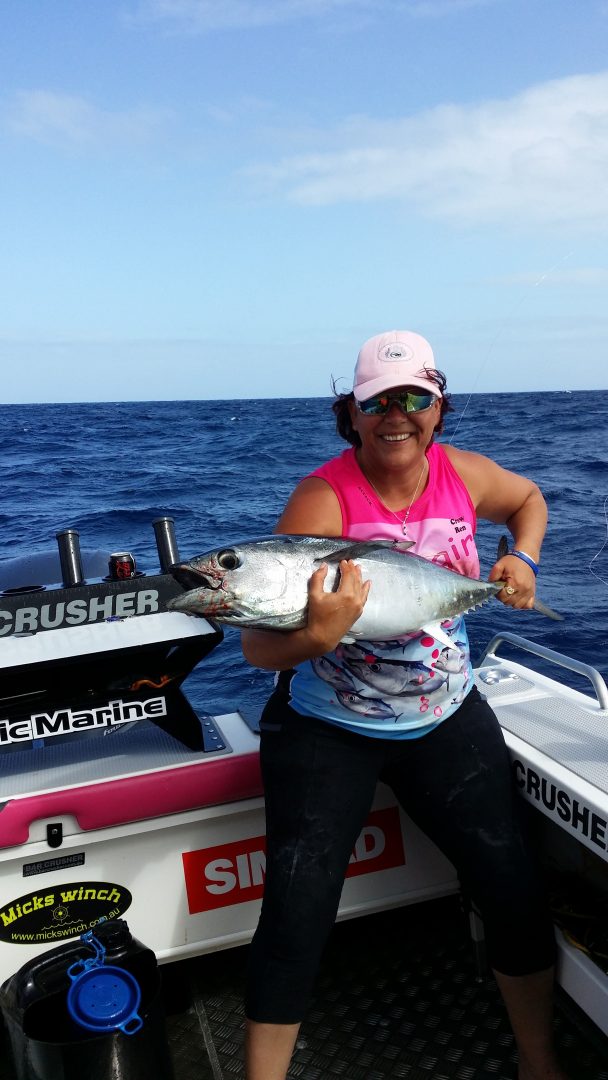 Friday was a free day we did the trek to Coffin Bay with a couple of the other crews and stocked up on cockles and oysters, then back to clean the boat and pack up.  Presentation night was held at the Marina Hotel again this year, the service and food at this pub is amazing. 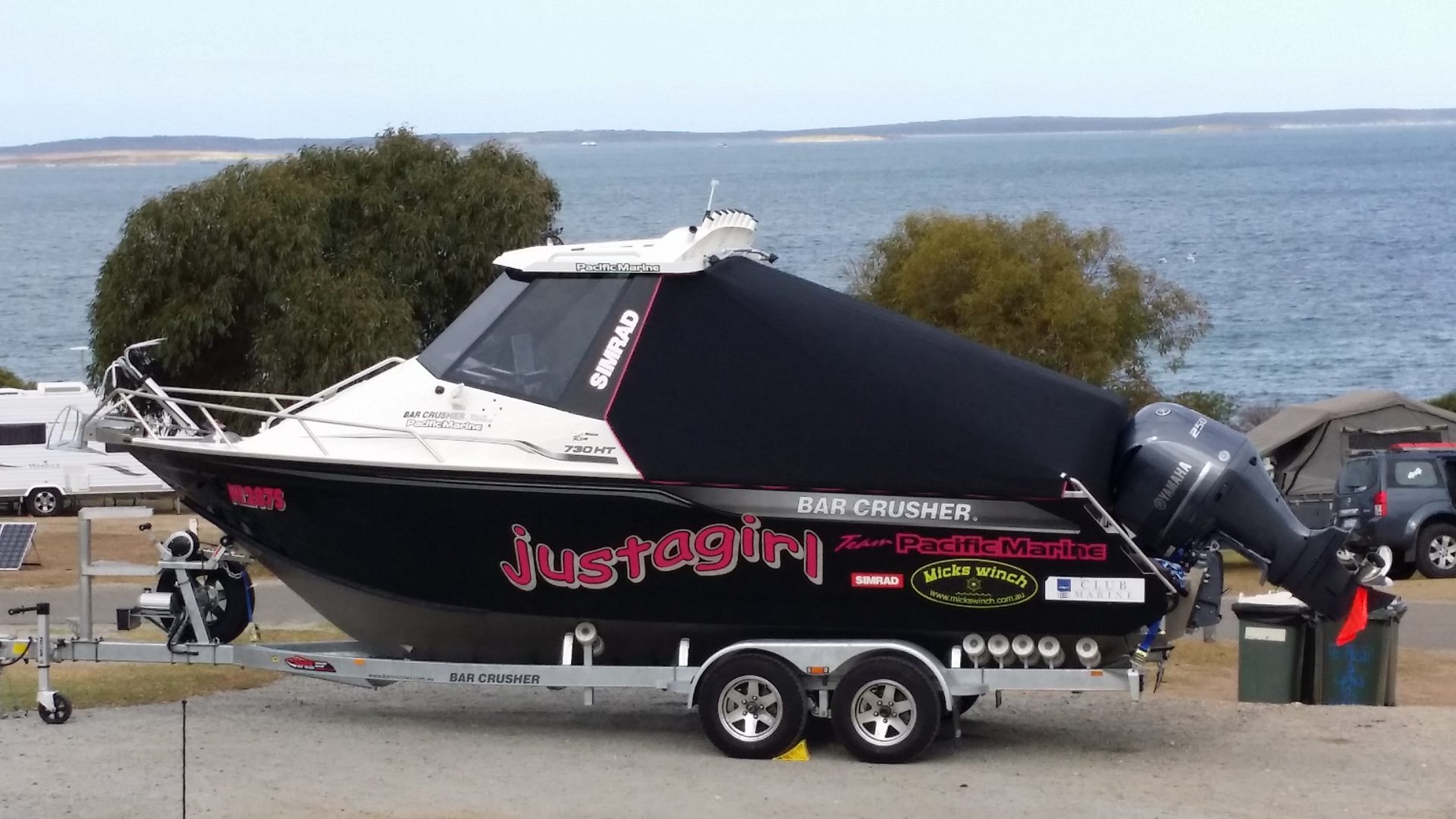 The presentations began, Champion less than 25ft Boat justagirl– we did it defended our title in the new boat points total was 9,970.8. Last fish of the day was mine on 4 kg with 562 points, one of only 3 fish I caught all week. This was what we had been out there for. Under 25 ft. Champion Lady angler and top lady tag point scorer Ren Martin, Top Male tag point Scorer – Kev Tito.

What a tournament, we didn’t think Wednesday morning that we would come near the boys. I would like to thank my crew for their massive effort we are all covered in bruises and sporting very stiff bodies., The game fishing club of SA for putting on the tournament, Steve Morris you are an amazing man thank you for your advice we did listen, the planning Steve has put into this event to accommodate the trailer boats is amazing. Thanks to the ground crew at camp, Lindsay for his patience in ferrying everyone to their Boats. Jerry for the hours he put in helping Steve before the event. Thanks to all the event sponsors.
Thank you to the people of Port Lincoln for your support everywhere we went people had heard off or followed us on facebook, you made us feel like celebrities. A special thanks to Chunky.
Thanks to our sponsors- Pacific Marine, Bar Crusher, Simrad and Micks Winch for getting the boat ready on time, she is now 2 weeks old and done a massive 60 hours. Thanks to Engel for keeping our food safe this and every trip, Unique trimming, Brett really squeezed his time to get the cover on before we went, there’s more to come yet, Club Marine who have just come on board taking care of all our insurance needs.
Thanks also to those sponsors who supported us from day one, Your secure future, Red Star Muay Thai kickboxing, Pickering Transport and attack apparel.
The Peter Teakle Port Lincoln Riviera  Blue Water 2015 on the  11th and 12th April is next for us. Stay tuned.